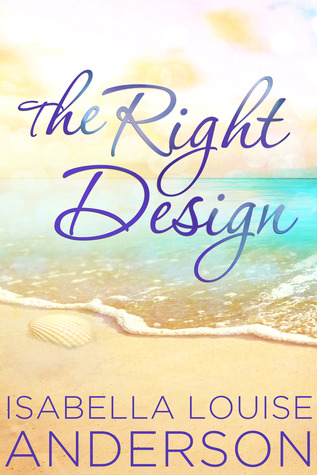 
Rating: ★★★★.5
Interior designer Carrie Newman could not have envisioned a more perfect life for herself. She had a great job doing what she loved, wonderful friends, and a close relationship with her sister and brother-in-law. Add in an amazing man who she’d hoped would soon become her husband, and her life was perfect. Until one devastating decision ruins her relationship and changes the course of her life.

Determined to make a new start, Carrie leaves Texas and heads to Palm Beach to pick up the pieces of her shattered and broken life. The last thing she expects is to find herself attracted to her first client at her new job—Brad Larson, who has proven himself time and time again to be cad.

But there’s something beneath the surface of Brad’s arrogant exterior that keeps her craving more of him—something almost sweet that Carrie can’t seem to resist.

Is Carrie ready to take another chance on romance? And will this new design of her life prove to be the right one…?

Confession: I saw the cover for this book and instantly wanted to know what it was all about! Once I read the synopsis I was so curious to know what the decision was that Carrie made that caused her life to change.

"Carrie Newman's day started out like any other, only there were presents involved."

This book. This is a book that I will probably re-read again soon. It was just so good! The Right Design has everything you would expect, this is the perfect definition of a Chick-lit read. I instantly felt a connection to Carrie, which is something that does not happen often. I felt like I could really relate to her throughout different moments in this book.

One of my favourite things about The Right Design was the amount of description/detailing that Isabella put in, it wasn't overkill but it was the perfect amount to really fill the readers imagination of how things were playing out. While this was chick-lit, The Right Design was also realistic in the sense of the real-life situations that were taking place.

Enter Brad. When we first met Brad I was actually a little hesitant of if he was a great match for Carrie, I also couldn't decide if I actually liked him. As the story progresses he ends up proving to be a character a became quite fond of. While I think the romance started a little fast between Carrie and Brad, they encounter a little set back that really puts their relationship to the test.

I felt so many different emotions while reading this book, which was surprising to me. I just didn't expect to feel such a strong connection to Carrie's character. I kept hoping that Carrie would get a happy ending! Did she get her happily ever after? Well you'll have to read it to find out! :)


The In-Between / The Bad

Overall, The Right Design absolutely blew my expectations out of the water! As a debut novel I strongly believe Isabella Louise Anderson is an author to watch out for. Should you read this? YES! I'll be recommending this to everyone of Goodreads!

“Carrie Newman?” he asked in an über-sexy Australian accent. Her toes curled at the sound of his voice. He reached out his hand and said, “I’m Oliver. Jane sent me over to help you unpack your boxes.”
Whether it was the Florida sun or the handsome man who stood in front of her that hit her like a heat wave, she blinked a few times more, and shook his masculine hand. “Thank you for coming, but I can manage. There are only a few of them anyway.” She pointed to her tightly packed car.
“I don’t mind.” Oliver smiled and clasped his hands, his voice sounding eager and more than ready to help.
I certainly could use your help in more ways than one, she thought to herself, calculating that it had been quite a while since she’d last had sex, which was way too long in her opinion. Shaking naughty thoughts away, Carrie regained her composure. “Thank you. I’d certainly appreciate your assistance.” She turned toward her car and pressed the unlock button, and then he took the lead. Between telling him which room to put the boxes in and passing one another between entranceways, Carrie tried to ignore Oliver’s flirtatious smile and the dimples indented in his cheeks. Finally, they unpacked the last two boxes from the car, leading them to meet in the kitchen.
“Is there anything else I can help you with?”
“No, but thank you for coming.” She observed sweat beading the sides of his forehead. “Can I get you some water? I think I have another bottle in the cooler.” She pointed to the cooler Sara had packed for her.
He wiped the sweat off with his forearm. “No, I’m okay. Thanks, though.”
“Okay.” She looked around her kitchen and awkward silence filled the room.
“Would you like to come to Nick & Johnnie’s tonight? I’m working as a bartender there, and I’d love to buy you a drink.”
Carrie blushed and bowed her head. “I’d love to, but I’m kind of tired,” she lied as his face turned somber. “But maybe soon,” she added, giving him a polite grin.
Oliver beamed. “Wonderful! I look forward to seeing you again.” With one last glance in her direction, he reached into his wallet, pulled out a card, and handed it to her. “Call me if you need anything else. I work full time for Moving Waves, but call anytime—even if you need a handyman—I do it all.”
She wanted to say, “I’m sure you do,” but kept quiet. Shaking her head once again at the dirty thoughts that swam back into her mind, she took his card and smiled at him. “You’ll be hearing from me if I need anything.” She followed him out the door and watched him get into the truck.
“Goodbye,” he said after rolling down the window.
“Bye,” Carrie said quietly as she waved her hand in the warm air.

Isabella grew up with a book in her hand, and to this day nothing has changed. She is a member of
the Romance Writers of America and has been featured on several blogs. While Isabella doesn’t blog a lot, she focuses her time on featuring other writers, along with working on her next book.

She created Chick Lit Goddess to share the love of the following genres: Chick Lit, Contemporary Romance, Romance, and Romantic Comedies! She loves featuring authors and their books.

Currently, she lives in Dallas with her husband and cat. She enjoys spicy Mexican food and drinking margaritas, and can be found spending time with family and friends, cheering on the Texas Rangers, and reading.

Isabella’s short story, Meet Me Under the Mistletoe, was featured in Simon & Fig’s Christmas anthology, Merry & Bright, in November 2013. The Right Design is her first novel.

Posted by Patty @ Bookish Wanderlove at 10:00