Review: Eyes On You 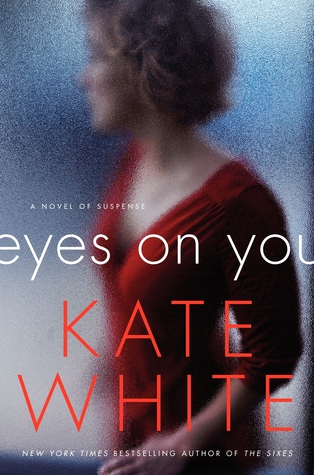 From New York Times bestselling author Kate White comes a riveting psychological suspense in which a media star must battle a malevolent enemy who may be disturbingly close to her.

After losing her on-air job two years ago, television host Robin Trainer has fought her way back and now she’s hotter than ever. With her new show climbing in the ratings and her first book a bestseller, she’s being dubbed a media double threat.

But suddenly, things begin to go wrong. Small incidents at first: a nasty note left in her purse; her photo shredded. But the obnoxious quickly becomes threatening when the foundation the makeup artist uses burns Robin’s face. It wasn’t an accident—someone had deliberately doctored with the product.

An adversary with a dark agenda wants to hurt Robin, and the clues point to someone she works with every day. While she frantically tries to put the pieces together and unmask this hidden foe, it becomes terrifyingly clear that the person responsible isn’t going to stop until Robin loses everything that matters to her . . . including her life. (Goodreads)

“The shoes had made a nasty dent in my paycheck, but I wasn’t sorry I’d splurged. They were Chanel, black-textured with a peep toe and a gold zipper up the back, really more of a booty than a stiletto. And not what you’d ever call “Fuck me” shoes-there was nothing about them that would make a guy want to bed you, unless he was the type who liked a razor-sharp heel at his throat.”

Finally getting around to writing some reviews for books I read earlier this year, as you can see I read this back in June. Better late than never, right?

When I first read the synopsis I was definitely intrigued. But my first thoughts were, "Wait. Kate White? Doesn't she write those self-help kind of books?" Close but no. I had no idea that she wrote a variety of different books until I came across Eyes On You on Edelweiss. Once I started reading I just didn’t want to put the book down! You know the board game Clue? Well I felt like my Clue senses were tingling! I kept trying to figure out who was after Robin. I was torn between two characters at around 35% but then by 70% I knew for sure who it was but that didn't deteriorate me.

What kept Eyes On You from getting 5 stars?

At times I found myself I little confused with Robin’s narration. At certain points I couldn’t tell if she was making a statement or questioning something, which often had me going back a page and re-reading trying to figuring it out. But I’ve chalked this all up to the fact that it’s an advanced ebook copy and there will most likely be changes by time it was published.

Overall, Eyes On You was a great mysterious read that kept me on my toes. I was so eager to get to the end, even when I guessed who the culprit was. I look forward to read more by Kate White, I noticed that she has two books coming out next year. I hope they're suspense novels!!!
Posted by Patty @ Bookish Wanderlove at 19:56