Review: To Defy a Sheikh 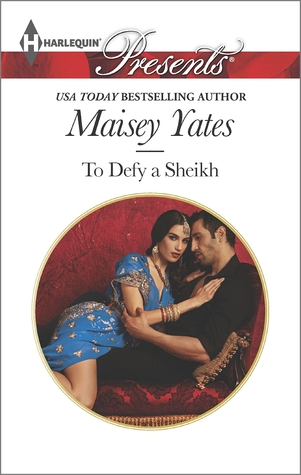 To Defy a Sheikh

Princess Samarah Al-Azem knows you cannot rush revenge. Having bided her time, she's finally ready to bring down Ferran, her kingdom's enemy and the man who took everything from her. In the still of night, she lies in wait in his bedchamber….

It isn't the first time Sheikh Ferran has found himself at the edge of an assassin's blade…but never has it been wielded by such a beautiful assailant. Soon he has her at his mercy—something he's wanted for years!

Now Samarah must decide: imprisonment in a cell…or in diamond shackles as his wife. (Goodreads)

"Sheikh Ferran Bashar, ruler of Khadra, would not survive the night. He didn't know it yet, but it was true."


Majority of the stars for To Defy a Sheikh come from the fact that I read this in one sitting. I was curious to see what Ferran was hiding and how Samarah would react, and when they would finally realize that they were in love with each other. I did really enjoy the development between Ferran and Samarah. There were some pretty intense scenes between Ferran and Samarah that had me fanning myself,

What kept To Defy a Sheikh from getting 5 stars?

The constant back and forth with Samarah coming to terms with her feelings and the situation with Ferran. Towards the start of the book it made sense for Samarah to be conflicted and not know if she can trust Ferran and what her attraction to him means. She's new to all this and has been surviving on her own for awhile now. But after awhile it got tiring and annoying and just wasn't applicable anymore. It was a constant back and forth that could have been written better.

Another reason, Ferran admits to something that he did, something that Samarah should know before they get married. I loved Ferran for being honest about this, sure he didn't tell her right away but he did tell her eventually. Her response? Sex. I'm sorry, WHAT!? This was completely unrealistic in so many ways. Sex should be the last thing on her mind with the information that Ferran shared and it made me strongly dislike Samarah's character and Maisey Yates' use of sex to divert the issue.

Lastly, Samarah's need for revenge. It took WAY too long for her to realize that she was no better than her father by seeking revenge. Her hardness made it impossible for me to connect with her character. Overall, To Defy a Sheikh was an okay read that just didn't really work for me. It had some intense scenes with an obvious display of chemistry between Ferran and Samarah, but that was about it. I recommend this to those that like romance novels.
Posted by Patty @ Bookish Wanderlove at 22:16