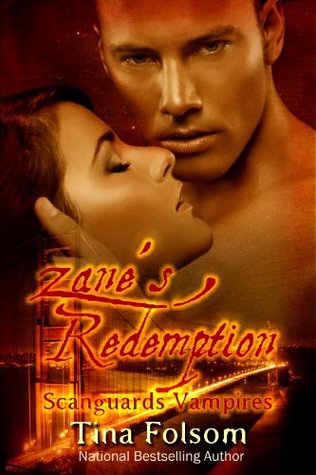 The last thing vampire bodyguard Zane wants to do is to guard a hybrid, a half-vampire, half-human, whose father wants to keep her a virgin. Known for his violent temper and callous lack of compassion, Zane’s out-of-control rage, born of the cruelty he suffered during the Holocaust, drives him to focus only on revenge. Trying to find the last of his torturers is his only goal in life.
Portia is a young hybrid with a serious dilemma: in a few weeks, her body will be set in its final vampire form. If she is to avoid having to live out her immortal life as a virgin, she must find a lover in that short time—something her father hires Zane to prevent.
The moment Portia and Zane meet, rules begin to bend, and a forbidden attraction bursts into flames hotter than the hell of Zane’s past. But that past threatens to pull them apart unless they can overcome their prejudice, forsake hate for love, and revenge for forgiveness.

Screw Phury. I found Zsadist's real twin and it's Zane!! I'm so happy to pick this series back up and dive into Zane's story, I've been so curious as to what happened in his past and now I'll finally get some answers!

"Zane heard a scream and blocked it out to prolong feeding from the succulent neck of the Latino kid he'd cornered in an alley in the Mission, the predominantly Mexican and South American neighbourhood of San Francisco."

I have been waiting to read about Zane and I'm so excited to have finally reached his story! Tina Folsom did not disappoint, although Amaury will always be my favourite. I didn't know what to expect while reading Zane's Redemption and I was shocked to realise all the pain and suffering he had to endure. His past helped me understand him better and also had me hoping for him to really experience love.

Portia was a great match for Zane. I couldn't how cruel her father was!! The moment Portia and Zane meet it's instant and intense attraction, wow. I enjoyed all the new characters we were introduced to minus Lauren, I'm happy Lauren wasn't a major character because she annoyed the heck out of me. This series just keeps getting better and better and I'm really enjoying how Tina Folsom is challenging her characters and allowing real character growth.

Overall, I was highly satisfied with Zane's Redemption! This series just continues to get better and better. I never feel like each story is being recycled, Tina Folsom manages to keep the stories fresh and exciting, oh and how can I forget, steamy ;). Up next, Quinn's Undying Rose!
Posted by Patty @ Bookish Wanderlove at 00:10